This past weekend I ran a small 5k to benefit the school where I teach. While it was small, it was a lot of fun, and the boys and I had a blast. One thing stuck out to me though, that I’ve thought about many times: your size doesn’t matter in running. Every body is a runner’s body.

One of the runners in the 5k was a women who was plus size. I overheard her tell someone that she was trying to lose weight, and that this was her first 5k. I probably should have walked over to her, wished her luck, and encouraged her, but I have a tendency to be shy and introverted. I’m working on that.

The course was not an easy course. There were a couple of big hills, (one was very steep) sharp turn arounds, and wind. After I finished, I stayed by the finish line to cheer for the other runners coming in. After a while, the woman I had overheard came in, pushing up the hill to run the last flat 100 meters or so to the finish. You could tell it was hard, and you could see she was pushing herself.

I don’t think a single person was standing there laughing. I was motivated, inspired. It was outstanding. To watch someone work so hard, and fight against the odds is amazing. 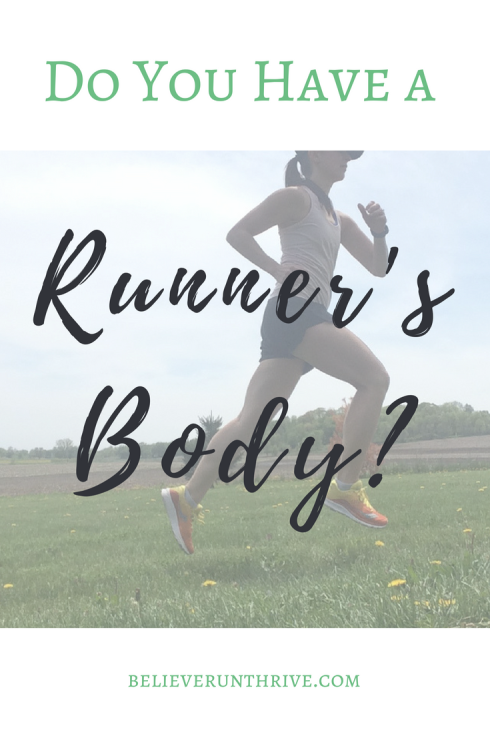 I have often heard people share a similar fear when it comes to running: I’m too fat to run. Everyone will laugh at the fat guy who can’t finish. People will stare at the fat girl and wonder why she bothers trying. I don’t look like a runner.

Often those fears stem from a lot of pain or fear. That fear can hold people back from making the changes they truly wish to make, whether that’s running their first 5k or joining an exercise class at the gym. That fear is very real. It could come from a long time of struggling with weight, or be the new product of trying to be comfortable in a different body after having babies.

But let me tell you something about fear: It’s a liar.

Anytime I have seen an overweight person running or working out, I have NEVER thought, “why bother?” Most of the time I want to honk my horn, and yell out the window, “Go runner!” (I don’t because it might freak her out.) It makes me happy to see people running, regardless of their size. I know how hard running is, and I know how hard losing weight is. Seeing people work hard, strive for better, and push themselves is so motivating and inspiring.

One of the best things about running is the people who do it. It doesn’t matter if it’s your first race, or your fiftieth, runners love running and they love those who share their love. Runners will cheer hard for the first person across the finish line, and even harder for the last person to cross.

No one cares if you “look” like a runner. What is a runner supposed to look like anyway? I’ve seen tall and short, big and slim, old and young at races. Every single person running is a runner. That’s the only criteria for running: that you run.

Find some runners to surround yourself with. You’ll find how easily they will welcome you, and how readily they will encourage you. Running is a great sport to do alone, but an even better one with company.

Marvel at What Your Body Can Do

I think women in general are particularly vulnerable when it comes to our insecurities. Whether it’s comments like, “You don’t look like a runner” or sideways glances when we run, it’s easy to get discouraged that we don’t have the “runner’s body.” We don’t have the long skinny legs, or the rock hard abs, or the narrow hips. (I’ve had three babies; I don’t have any of those things.)

Quite frankly, I’m done with that. I’ve read articles about an obese woman who ran ultras, moms who run while pregnant (I did!), aging men and women who still race. This idea that there is a certain body you need to have to run is ridiculous.

Running can certainly transform your body, but more than that, it has the ability to transform how you view and feel about your body. You’re body can do amazing things, regardless of size! Watching that woman finish her first 5k is proof of that!

Let’s get rid of this idea of the “runner’s body” and celebrate our amazingly created bodies that can do wonderful things! Think of the awesome things your body can do and has done. Don’t let that liar – fear – put doubts in your head that stop you from pursuing thing you want to do or dream about doing.

If you struggle with insecurity, please let me be the person who puts her arm around you and say, “You’re killing it. Don’t give up!” Punch fear in the nose and go for it!

My Life in Squares