What an experience! I’m so grateful for how the race went, and even though I’m disappointed in my performance, I really couldn’t have asked for a better day.

I went into it with a goal of breaking 2:15, but like I said before, wasn’t stressing too much about it. Well, the day before the race, I kept mentally freaking myself out, and I needed to constantly remind myself that I’m only five months removed from having a baby, and to let my body do what it could. I ended up finishing in 2:15:40; didn’t quite make my goal, but still not bad. The last 1/2 marathon I did was over a year ago (May 2015), I was in better shape, but was dealing with an injury and finished with a time of 2:20. I had no injuries or other issues this race and I’m so thankful for that. 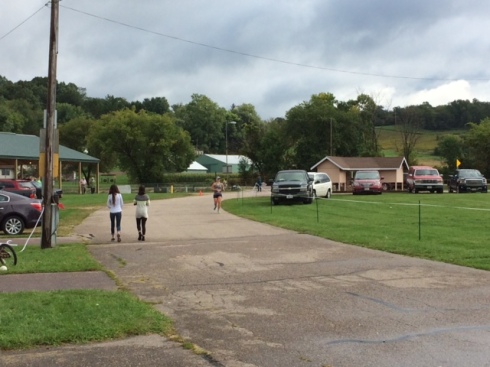 I had thought about getting up early and doing an easy couple of miles, but opted for more sleep. I did nothing unusual from my regular routine. I did have a difficult time thinking about what to have for dinner that wouldn’t cause any stomach issues during the race and settle on soup. It worked just fine.

Before bed, I set up all of my stuff: clothes, shoes, change of clothes, water, recovery drink hat, gels, phone, etc.

5:45am – Leave for race. My husband graciously stayed with the three kiddos and would bring them to the finish line. (He’s pretty great.) On the drive over, it rained. And rained. I started to get a little freaked and just prayed that it would stop.

6am – Packet pick up, parking, bathroom, yada, yada. Typical race stuff. I had plenty of time to kill, so I checked and double checked that I have everything.

7am – The marathon starts. The marathoners had an out and back race; we shared the same course. The second the gun went off, the skies opened on the poor runners. I love the starts of races. So much adrenaline and energy are humming, that even though it was pouring, it was still awesome. After the start, we loaded onto the bus that took us to the half marathon start. There was a bit of time to drop my bag off, go to the bathroom, and warm up a little.

8am – Race starts. We race up the trail for about a mile before we turned and basically had a straight shot to the finish. The race was along the Elroy- Sparta Trail. It was part of an old railway line that has been converted into bike paths and it’s unbelievably gorgeous. The rain had stopped, but the sun was hidden and the weather was actually pretty perfect for running. My plan for the race was to be somewhat conservative:

I was able to stick to that pretty well, but unfortunately I relied on my phone’s running app which must not be accurate. I have it set to prompt me after every mile and it kept telling me my current pace was around 9:30, so I thought I was good. Well, that wasn’t true. So while I thought I was hitting my goal paces, I was about 30 secs slower. Lesson learned.

The course is beautiful. While I was running I just kept reminding myself how lucky I was to be running and thanking God for the perfect day, beautiful trail, and strength to keep going. About 6 miles in, there’s a tunnel (they had it lit for the race). It was really cool to run though, although a little disorienting.

I had planned to take a couple gels throughout the race: One at mile 4, one at mile 8, and I ended up taking one at mile 10 since they had them at the water station. I walked through each water station I stopped at, which was about half of them. (They had water stations about every other mile.) I took only water since I was using gels. I figured I didn’t need gatorade or anything like that.

I was feeling pretty strong and confident, (although had I known I was slower than I thought, I definitely could have pushed it) for those first 10 miles. Taking everything one step, one mile at a time.

Around 10 miles is always where it gets a little tough; the last mile and a half are such a mental game. I was able to keep my pace, but definitely, felt it. The last mile of the race actually went through town a little, with the slightest increase in elevation. For the most part, that course is flat.

There were several points where the trail crosses traffic, and usually race volunteers would stop the traffic for the runners. Around mile 11, I came to an intersection, and the race volunteer was kind of confusing in his motions. I ended up stopping and waiting for some cars. I wasn’t too happy about that.

The finish was pretty nice; not like a super long shoot or painful loop or anything. I was actually able to kick it up and finish that last 1/4 mile or so at probably a 8 min/mile pace. (Again, I could have pushed harder during the race.)

As I rounded the last curve, I saw my family there, which always makes me so happy! The boys were going to run the last stretch with me, which I love. As they saw me approach, they took off. 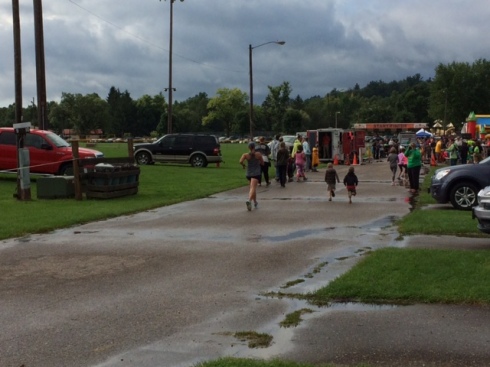 Unfortunately, a few people were gather in the finish area (I was NOT please about that). One girl was walking across and ended running into my 3 year old and knocking him into a puddle. Poor kid. I picked him up and carried him across the finish line for a less than spectacular finish.

Who knows, had I known my pace was off, and hadn’t been stopped by traffic, and didn’t have to stop to carry my kid, could I have beaten 2:15? Probably. But it is what it is.  I can’t go back and change anything; I can only learn from this race and push on to do better.

I am disappointed. Mainly because I feel like I could have pushed myself more. Am I overall happy that I (think I) set a PR 5 months after baby? Yes. Am I thrilled knowing that I made progress in my running and fitness since having kids? Yes. But I do get frustrated when I want to reach goals that just seem unattainable right now. I know I have to be patient and keep working hard. Good things don’t come to those who wait. Good things come to those who work for it.

I plan on doing another half (also on the same trail, just a different part of the trail), in November. These next two months will focus a bit more on speed and hill workouts, since I’ve already built up mileage. I’m also planning on running some shorter races (2-3, 5ks) to help with speed.

Everyone’s ability and experience is different. I have to stop comparing myself to someone who has been running uninterrupted for year. I’ve had three babies in four years. I need to give myself some grace and focus on working hard and letting my running unfold. Maybe I will never break 2 hours for the half marathon (I firmly believe I can.), or qualify for Boston (the ultimate goal). Does that mean I’m going to stop running? No! In the great scheme of things, times don’t matter as much as the enjoyment in the journey. No amount of disappointment is going to stop me from getting the most out of my running. It’s such a blessing.

How do you come back from disappointment? Have you ever had a race you felt you could have given more?