Holy cow does time fly. Seriously! My baby is now four months and I’m staring at the unforgiving face of another school year. Why is it we wait the entire winter for summer, and then is gone in the blink of an eye? Not cool, time. Not cool.

If your summer has been anything like mine, it’s been full, busy, and absolutely wonderful. I love summer, and every year it’s harder and harder so see summer end. Don’t get me wrong, I love autumn and I’m looking forward to pumpkins and apple cider and football, but I’ll miss summer. Let’s all take a moment and reflect on summer.

We were plenty busy this year, and no matter how many times I tell myself I’m going to relax, take it easy, do plenty of school work, it never happens. We took several long trips. (TN and SD – roadtripping with  a newborn is NOT recommended.) Plenty of family get-togethers, showers, parties, visits, and mini-trips. I’ve barely had time to keep up with the house and garden. (Sidenote: the garden became overgrown with weeds and we’ve been fighting a losing battle all summer.) But it’s been wonderful.

My running has been going really well, too. I’m almost back to where I was before pregnancy, but not quite. It feels good to know that with some hard work, within the year I should be better than I was before I got pregnant. So happy that I kept running through my pregnancy; it really helped me maintain my fitness level. Yay!

I’ve been training for a half marathon in September and it’s been going pretty well. I’m hoping to beat 2:15, but I’m not stressing over it. I’m planning on doing another 1/2 in November, so if this first one if terrible, I can make it up. Which is such a big lesson to learn! I’ve gotten so down on myself for races that went less than stellar because of injury, conditions, or mental or physical setbacks and I’m sick of it! This is probably the best attitude I’ve had around a race in a long time. The other day I had a 12 mile long run. Now, 12 miles is long, I know, but for the first time it was just another run. No stressing, no worrying about how long it would take or how awful it would feel. Just another run that required a couple of gels in my pocket. And the last couple of miles did hurt, but it didn’t matter and they ended up being my fastest two miles.

That was such a big step for me. Because running isn’t always just about going farther or faster, or getting skinnier or stronger. Some of the greatest achievements in running come from the mental strength you gain. Something that once seemed impossible, like running 12 miles, becomes just another run. Not a big deal. (Maybe someday I’ll view a 20 mile run like that.) That mental strength can be such a blessing.

So as fall descends, go ahead and do something that seems hard, whether it’s a 12 mile run or a trip to the grocery store with all your children in tow. Build that mental strength. But I would recommend running; autumn is cross-country season after all!

Here are the 4 month updates:

Baby Girl: She’s so sweet! I love babies at this age. She smiles, laughs, and plays. She rolls over and looks around. She recognizes her daddy and brothers. She’s no longer just a cute little blob, but an actual tiny person with a personality. She does have her crabby moments, as we all do, but in general her disposition is a sunny one. She still sleeps well, although ever since coming back from vacation she’s been off her game a bit. She takes several naps throughout the day and is usually down for the night before 8. Usually. She’s still breastfed, although with school starting soon, I may have to start supplementing with formula. I’m not wild about the idea, but it is what it is. My goal has always been to exclusively breastfeed until 6 months. We might make it to 5 with her. No solids yet, but will be starting that within a month or 2 I’m sure. 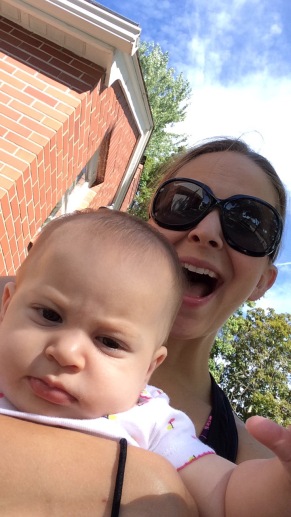 Workouts: Like I said, they’ve been going pretty well. I’ve incorporated speedwork, hill work and pace work into my training and I’m hoping it helps come September. I’m still doing yoga, but it’s about once a week, and I’m trying to fit in strength training too. I just got the Beachbody on Demand and have been doing P90X3 with my running. I’m hoping that more strength training and functional moves will help keep me injury-free. Cross-training is so key, but I’m terrible at getting it done!

Nutrition: Well it’s summer, so let’s just say it hasn’t been perfect. Still emphasizing protein and fat. I make protein shakes with about 2 tablespoons of coconut oil blended in. to keep those two nutrients up. If you’re nursing, I would HIGHLY recommend adding coconut oil to your diet; the benefits are amazing. (I also snack on coconut manna.) Avocados, peanut and almond butter are a big part of my diet. I’ve slowly brought dairy in, and Baby Girl seems to tolerate it just fine. (Still full fat and organic if I can.) I’ve tried to limit gluten and sugar, but like I said, I haven’t been perfect. Birthdays and parties and vacations seem to get in the way of healthy eating.

Weight loss: Since coming home from the hospital (after the initial weight loss) I’ve lost about 10 pounds. (Give or take, weight fluctuates.) That puts me at about 5-6 pounds from my pre-pregnancy weight, which is pretty amazing. My guess is those pounds will probably want to stick around until I’ve weaned Baby Girl. It happens. I can get most of my clothes on, which is great, but they’re still snug. I’ll be happy when everything fits normally again. The greatest thing that’s happened this time around is I’m not stressing over it. Yes, I want the weight gone, but since I know it will come off, I’m not freaking out. (Granted it took two pregnancies and two rounds of 25-30 pound weight loss to get to the point where I’m confident the weight will come off.) So give yourself a break, remind yourself that you can do it and try not to stress over any baby weight.

Did your summer fly by? What did you do to keep active?